Before  you go forward to view our website please take a moment to read over this short post about an experience we had with a fellow breeder NORCALI POMERANIANS.

We would like to warn others of this "group" of several breeders who share Norcali pomeranians facebook page.  It is several woman running this page, however they all have their own individual kennel names. Belissimme pomeranians in also known as Bettina Lavender AKA Tina Marie, Bettina Burnette , Tink Burnette and or the last name Pizzi and several other names. Norcali pomeranians is knowingly breeding poms from a Sire whom has BSD. This is a genetic condition and should not be bred.

Several members including Mary Olson/Beth, Monica Smith and her mother Jeannine Trujjilo from pouty poms have BSD offspring they are breeding. Alice in wonderland from Mary as well as Ruby & Jewels from Pouty poms are all from a BSD Father . I will post these photos below.

Bettina (Belissimme pomeranians) breeds brother to sisters, she paired Sparkles (who also is out of this BSD Sire to her half brother , same mother. Bettina bought a few dogs from me in the past the laundry list of bad things that followed are so extensive I ask you to just contact me directly for full details but will share a few. One puppy she got from me "Ginger" was viciously mauled to death by Bettinas male boxer, she than lied to me for months saying how well she was doing when all along she was dead. One day when she couldnt provide me with current photos of Ginger she called me and said she was mauled by her boxer, and in great detail told me how her brains were coming out.

She sales under age puppies. Breeds 11 month old babies , who are not even out of their "puppy uglies" stage.  Her Chloe broke her leg from falling off a chair after I told this woman no couches or chairs.

She co owns dogs with her Daughter (the one flipping off the camera) see photo.

Her Daughter and her breed Boston terriers as well as her Daughter breeds Pit bulls, & "Pitskies"

husky pit mix. The poor babies are kept in muck and Poo all over the floor as well as tiny dirty wire cages.

Their Pitbull attacked the Husky & the poor baby lost its leg. Reba was attacked by Sparkles and killed. Sparkles Sire has BSD & she has aggression issues but these people still breed her AND to her brother.

Feel free to contact me for more details if you like. Bad breeders need to be brought to light.

Dont let their facebook page of "show" dogs fool you. They post them on their page as a cover up to try to look righteous. These people are back yard breeders.

A message she sent to someone elseBettina admitting Sparkles was bred to Romeo. They are form the same Mother. She tells people she didnt breed her

Here Bettina says Sparkles has BSD in her line, but still bred her & to a sibling

A post someone made about a sick pup from Bettina.

Never buy from a breedr who breeds many different breeds

Amari is being advertised as getting ready to be bred in Feb 2021. In May of 2020 she was a baby. These people breed very young females whom in photos you can see are not even out of puppy coat yet, by the bald forehead

Sire to several of Norcali dogs being bred. Monica smiths two girls Jewels and Ruby as well as Sparkles being bred by Bettina & Mary Olson/Beth girl Alice in Wonderland. 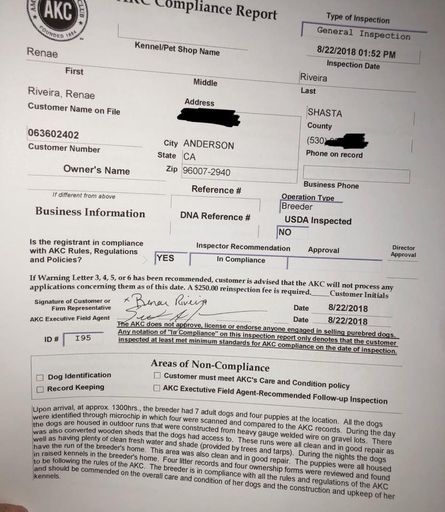 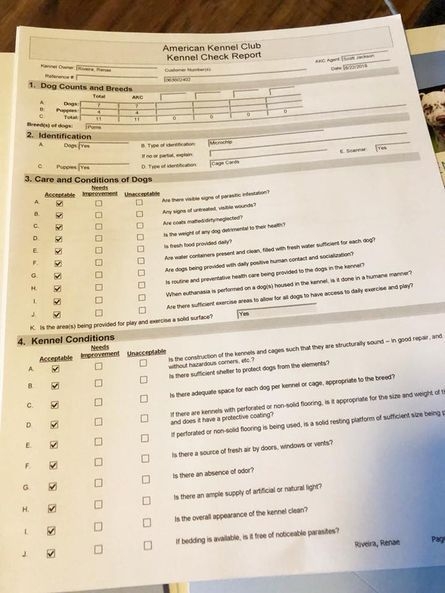 Above is our inspection report.​

We are located in Northern Ca. Here at Riveira Pomeranians we take great pride in having some of the most amazing show quality pomeranians in the US. Some of our dogs have Russian lines & most are CH or GCH Sired. We do NOT sale to other breeders unless under a show contract to small show enthusiast other wise all puppies are under Spay/Neuter agreements. No puppy mills, pet stores, or brokers!!

We hold very high standards when it comes to the integrity of our program and quality of our babies! We strive to produce 100% sound, correct puppies that meet show standards. I love a very cobby, square, Teddy bear faced Pom with a Heavy coat, short legs and solid bone. Health and temperament is always first in mind as we take health of our puppies very serious! We do not breed dogs with coat issues, trachea issues, leggy or incorrect structure.

All our dogs eat Fromm as well as in addition to homemade home cooked organic meals as well as NuVet vitamins. We do not cage or kennel our dogs, they sleep in my daughters room on her bed or in their beds in her room. We have a doggy door in our dining room that goes out to the back yard where they have free roam as they please. We do have an outside kennel. Please note they do not live in here. This kennel is only used if weather does not permit them to go outside like if it is raining and wet outside or too hot in the summer as it gets over 115 degrees here.

The kennel is used when weather does not permit them to go outside. Their kennel is 60 ft long 10 ft wide and 14 ft of it is indoor fully insulated with heating and air. It is cleaned and disinfected routinely with kennel Sol. So our dogs live indoor in our home and have free access through a doggy door to our yard and use the kennel only when needed.

This web site is a shared site with my Mother who also raises pom. We do NOT mix breed nor do we condone this practice, we try to preserve the integrity of the breed. We may request to video chat with you to see where the puppy will be going to. We will only place our puppies in forever loving homes. Please make sure you have 12-16 years to commit to a new family member and we recommend you research this breed.

Our puppies are born in our home, handled from birth from day one. We take a lot of time to socialize our babies. We take cleanliness as top priority with our babies. Toys, blankets, bedding, dishes and cages are cleaned daily. We have many references.

We have a trusted in cabin puppy nanny who has flown many of our babies all over the US at buyers expense. However we recommend you if possible to come in person. You may fly into the Sacramento or Redding airport & take your baby home as a carry on. We do NOT ship in cargo!

We do Not release our puppies younger than a minimum of 9 to 10 weeks old, sometimes we will hold on to a puppy longer if we feel he/she needs more time with mom or is on the smaller side. All puppies are examined at 8 weeks old by our established vet, will have age appropriate vaccines, Microchip at buyers request and "if" the puppy is big enough to chip, deworming, deflea, will have sample of NuVet vitamins and everything on record.

Please Note our poms do not live in their outside house. In fact it is almost never in use. They are only in it when it is raining outside and need a dry place to potty at. It is insulated & has heating as well as A/C. Our poms live and sleep inside our house, where we have  a doggy door in the dining room that goes out to our back yard & they have free access 24/7 to go in and out as they please.

Puppy kits are for LOCAL buyers only. We can ship one at buyers expense.

Here at Riveira Pomeranians we take the health of our babies serious. We feed our kids like Kings & Queens! In addition to Fromm Dry kibble we also feed Organic home cooked meals. Everything is Organic. They get a variety of meats like Beef, rabbit, duck, turkey, Tripe, Buffalo as well as Farm fresh Eggs, brown rice, organic Fruits & Veggies as well as their favorite...Sardines for Omega fats. We feed Dry kibble in small portions while home cooked meals is their main diet.

Dogs need real meat in their diets & Dry dehydrated kibbles are so full of fillers, sugars and bad stuff, even the expensive name brand ones are typically not good for them. The starch in dry food turns into sugar which causes inflammation, which in turn causes many health issues including heart disease, arthritis, diabetes, cancer and many more issues.

We also feed organ meats but this should be fed in small proportions as well as muscle meats.  Dogs are omnivores and need fresh meats as well as fruits and veggies.

There is NO such thing as a "Micro" "T-Cup" or "Pocket pomeranian" these are words back yard breeders use to justify Big prices and to dupe uninformed buyers into spending Big Money, they are names to describe a genetic anomaly that has resulted in a much smaller than breed standard. Reputable breeders do not refer to their puppies as T-cup,Micro,or Pocket size. Puppies are NOT a fashion accessory! The smaller than "Normal" size babies are usually just the "Runt" and a lot of the time are more fine bone, have open skulls (Soft spot or Font) are more likely to have Hypoglycemia issues (Low Sugar) that can lead to death, Liver shunt, Hydrocephalus (water on the brain), Heart problems, undescended testicles,collapsing trachea,luxating patellas,Seizures,digestive problems and the list goes on...They are also more likely to injure themselves in simple activities like playing,running, or jumping from a couch,more often than not these so called Micros or T-Cups don't make it to see their first Birthday. REMEMBER just because a puppy passes its 8 or 10 weeks vet exam does Not guarantee that the puppy is in fact healthy. Most vets only do a standard check, temp,look in eyes & mouth and listen to heart then sign off the puppy as "Healthy".